The story begins in France, as a boy learns from his grandmother to cook with love…

Philippe Marill’s taste for fleur de sel and love of fine food began at a young age. He was raised in Montpellier, not far from the Camargue marshes where a large portion of French fleur de sel is produced. However, it was his grandmother, Mamie Rose, who inspired his passion for cooking. She taught him that all you need are three flavours and the magic of fleur de sel sprinkled on top to elevate the simplest of foods. She also helped him master the three-finger pinch! The crystallized sea salt flakes were a staple on the table, a delicious finishing touch to every meal. Consequently Salt Spring Sea Salt was born.

As an adult, Philippe spent many years living in California, where he met his wife, Carolyn Kvajic. Whenever he returned to visit family in France, he would stock up on his beloved fleur de sel.

We moved to Salt Spring Island in 2013, inspired by area’s natural beauty, organic produce, farm-to-table products, and artisan creations. Within a year, we had completely run out of the fleur de sel we had brought to the island. Looking around at the pristine natural beauty and the ocean of water at our doorstep, we had an “aha” moment – let’s make our own!

Philippe had always been intrigued at how fleur de sel is created through a fluke of nature. It happens only in a few places in the world. As a whole lot of elements have to occur at the same time. And even then, it may only happen for a few days a year.

In order to fully understand how fleur de sel crystals are formed, and the unique conditions that must exist for it to happen, Philippe spent six months researching and deconstructing the process. At this point he then rebuilt the process in a commercial kitchen, fine-tuning temperature and air circulation to create the ideal environmental conditions for producing and harvesting the delicate crystals.

Philippe began to experiment by infusing the crystals with everything from red wine, wild blackberries, and locally grown rosemary and garlic to such classic flavour profiles as balsamic vinegar, lemon zest and chocolate. The result is a delight to the senses. Pure and unrefined, each infused sea salt has a distinct colour, taste and aroma, and pairs beautifully with different foods to elevate both taste and visual appeal. Check out the products Philippe has created!

We are proud to transform regular Pacific seawater into a fleur de sel that rivals its French origins. We harvest, evaporate, sift, prepare, pack and label all of our products by hand, using only the very best fleur de sel crystals, and are continually experimenting with new recipes. 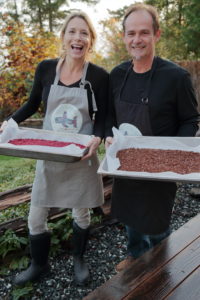 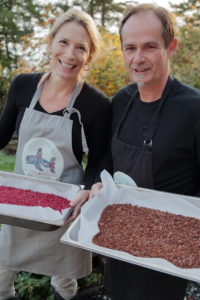